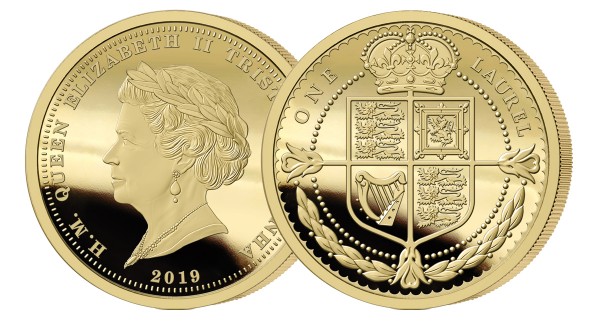 2019 was the 400th anniversary of the very first issue of the Laurel, the successor to the original sovereign.
It was struck for a total of 6 years during the 17th Century in the final years of the reign of King James I.

The coin was named after the obverse design that saw the king unusually wear a laurel wreath on his head, rather than a crown.  In addition, the coin uniquely saw the effigy of James I face the wrong way compared to all other coins of his reign.

Struck in 22 Carat Gold, the 2019 Gold Proof Laurel commemorative features the rare laurel effigy, only this time of Queen Elizabeth II.
As well as this, the effigy of the Queen also faces the opposite way to all her other coinage that is currently released throughout the world.  This makes this coin genuinely unique.